Anybody hone their PR skills while watching the debate?

I’m a political junky and watched the first presidential debate from start to finish.

I didn’t take political sides but, instead, I viewed the debate from the perspective of a PR professional, examining each candidate’s responses to questions and thinking out loud (much to the dismay of my wife) what they could have said differently, better, or, in some cases, say nothing at all.

It was hard not to critique because, in my profession, we often work with our clients to prepare them for public speaking.

This preparation covers all aspects of public speaking including what to wear, what mannerisms to display and how to appropriately respond to questions. Most importantly, we train speakers on how to deflect questions that may be inappropriate by using bridging techniques that get them back to their key messages.

Do other PR professionals do this during debates? What other events / activities do you find yourself evaluating responses to things from a PR perspective?
Posted by thePRexperts at 12:57 PM No comments: 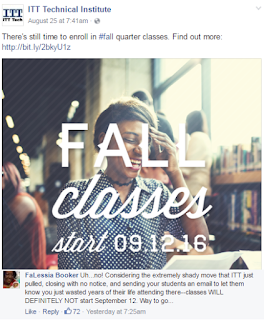 When “all hell breaks loose” at an organization, employees are left scrambling to pick up the pieces. In the midst of chaos, social media may be tossed aside. It can be an afterthought, an extraneous side project they no longer have time for. But wait…don’t these organizations realize that crisis-mode is the most important time to be using social media? Don’t they realize that it’s the one time when the public is most interested in what they have to say? Don’t they realize that this is the worst time for there to be radio silence?

For ITT Technical Institute, the answer to all of these questions is a big fat no. The for-profit college chain was forced to abruptly close its doors in recent weeks after the Department of Education cut its funding, leaving 40,000 students and 8,000 employees in the lurch.

All of the 130 campuses were closed immediately, in turn closing the door on current students’ plans for graduation. Despite promises of loan forgiveness, students are understandably angry. As one might expect, these angry students have taken to social media to voice their complaints. While ITT did issue a news release about the situation, not a single social media post has been made about the situation.

Instead, most recent posts on their Facebook and Twitter pages thank high school students for visiting their campus and encourage followers to sign up for fall classes. Looking at those posts now, all you’ll find is one berating comment after another, mocking the clear irrelevance of these posts. Hundreds of rational comments are being left with no response. Beyond just angry students, ITT’s closing has become a national story. By now, no doubt thousands of people are visiting their social media pages and leaving with a very unpleasant taste in their mouth.

ITT’s social media pages are still active…and have become a “permanent” holding area for people to express their frustrations…and hear nothing back. See how poorly that reflects on this now defunct organization? Let this be a lesson: in times of crisis, the worst thing you can do is let complaints pile up on social media without acknowledgment or explanation, especially in this channel where your audience is obviously listening. Social media is your VOICE to your public. So use it.
Posted by thePRexperts at 8:40 AM No comments:

If you want to be an effective PR professional, knowing how to build relationships is essential. It runs the gamut from clients to reporters to community, business and industry leaders. But sometimes I run into people who mistake using technology as the prime way to relationship build. They’ll say “Oh, I sent them an email” or “I Tweeted, texted or Facebooked them.” And they might add that they’re frustrated because they can’t seem to connect with the other person no matter how many contacts there have been.

The thing to keep in mind is that tiny bits and bites of information and electronic contacts rarely build a relationship. Don’t get me wrong, they’re great tools to use, but relationship building is really about getting to know who THEY are; what are their likes/dislikes, what’s their job/company like; what’s their history, who are they as a person? It means you take the time to find out about them; maybe doing some initial research online to get a better idea of who they are and some clues as to what you can talk about when you’re not directly discussing business. Then, it’s always a good idea to actually talk to them (as in on the phone or, even better, in person when it’s possible). Online communication may be faster, but an occasional or even regular conversation is guaranteed to be more valuable.

So the next time you’re tempted to use technology to communicate with someone, think twice. Maybe it is OK, but how long has it been since you actually talked? Would it be better to schedule a meeting or pick up the phone? Keep that in mind as you build relationships throughout your PR career.
Posted by thePRexperts at 8:08 AM No comments: