Social Media as a News Source

A new study by Pew Research Center and Knight Foundation found that more Americans are using Facebook and Twitter as a news source. With more and more people spending more and more time with social media, that finding comes as no surprise.

The stats from the study show that:

According to the survey, most Americans still see Twitter and Facebook as secondary news sources, but there are distinct differences in the way different age groups view the value of social media accounts as news sources. Overall, 60 percent of those surveyed said that social media was “not a very important way” for them to get news. In the younger demographic (18-to-34-year-olds), however, nearly half said it was “the most important” or “an important” way for them to get news.

Digging a little bit deeper, the study found that Facebook users are more likely to engage with political content than those on Twitter – 35 percent of those on Facebook say they post about politics, while it drops to 25 percent on Twitter. (Of course, we all have those social media “friends” who love to let us know their political leanings.)

Count me among those who now look to social media more often to get news updates, while I still consider the “traditional media” as my main source of news. But it’s easy to see why more and more people are looking to Facebook, Twitter and other social media for the latest news, particularly as we continue to become a more mobile society that expect immediate information.

How often do you look to social media for news? Are Facebook and Twitter important news sources for you?
Posted by thePRexperts at 12:25 PM No comments:

How to make the un-interesting, interesting...well sort of! 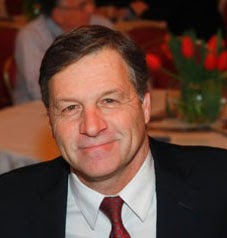 We've all been there. You're at a party or other social event, and you find yourself in a small group of people listening to someone talk about something that's not really that interesting. This can usually go one of two ways. One, you politely nod along with the story, throwing in the occasional nod of agreement if the storyteller suddenly makes eye contact with you. Or two, you highjack the conversation and turn it into a battle of wits, using all your abilities to salvage a boring topic with some clever repertoire and humor.

The ability to take the boring — or at least the perception of being boring — and spin it into a clever and engaging story, social media post or column, is a daunting task many communications professionals face. Knowing how to generate interest from the un-interesting is a challenge, one that calls upon the author to use every resource possible to find a way to liven up the message.
Here are two great examples:
Want to make your writing and presentations more engaging? Don't be afraid to take some chances. Ramp up the enthusiasm, and act — or write — like the topic is one worthy of taking up a few moments of someone's time. In this day and age, that's a challenge. Don't be that guy everyone is trying to avoid eye contact with. Instead, move those arms, raise that voice (so to speak) and do what it takes to grab the reader’s attention. Once you have it, delivering a message or a point, is much easier.

What tool(s) do you use to generate audience interest in a project you're working on?
What's the best example of making a boring topic interesting that you can think of?
Posted by thePRexperts at 12:36 PM No comments:

Chevrolet gets A+ for creativity, but that’s about it

If you haven’t heard, Chevrolet recently sent out an all-emoji news release to announce the upcoming reveal of the newly redesigned Chevrolet Cruze. The release was distributed via social media and asked followers to decode the release and tweet what their interpretation of the release was to #ChevyGoes Emoji.

Here are the first few paragraphs of the release pulled from Chevy’s website: 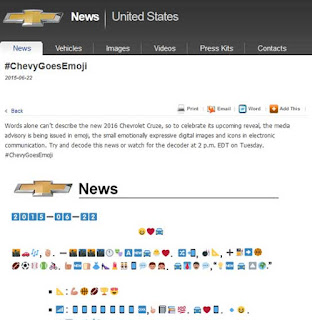 The full release can be viewed at: http://media.chevrolet.com/media/us/en/chevrolet/news.detail.html/content/Pages/news/us/en/2015/jun/0622-cruze-emoji.html

On its face, this is a very clever idea. The Chevy Cruze is a car that is traditionally purchased by younger buyers, the millennials. This group is viewed as very tech savvy and they would appreciate this news release. What’s certain is it’s definitely generated a lot of buzz, mostly in the media.

What’s not certain is if anyone really knows what the release said. Of course, later in the day following the distribution of the emoji release, Chevy posted a translation to the company’s website. Because of my profession and through personal curiosity, I decided to investigate this potential new way to communicate and enlisted the help of my two highly tech savvy stepdaughters, ages 14 and 11, along with a few of their friends for a less than scientific study. I gave them the emoji news release and asked if they could tell me what it said.

Keep in mind, these age groups use emojis and a vast array of other social media that older millennials, with the funds and a valid driver’s license to own a car, likely don’t even know about. None of them could decipher the release with real meaning. Yes, they could tell you what most, if not all, of the emojis represented, but none of them could translate it into something that made sense in English.

Hence, I give Chevrolet an A+ for creating a clever way of getting its announcement noticed but it’s an epic fail if there was a real expectation by Chevy that anyone could reasonably decipher its message.

What are your thoughts? Was this a great idea or a poorly planned gimmick?
Posted by thePRexperts at 12:23 PM No comments: