It’s been more than two weeks since the Super Bowl and I still hear people talking about Cam Newton’s performance. The conversation generally ignores the way he played during the game and, instead, focuses on his “show” to the media after the Panthers’ loss to the Broncos.

I’ve got to admit, I wasn’t a real Newton fan; he was just a bit too brash on the field for me. But as the Super Bowl was approaching, and I was seeing and reading more about the young QB, I was coming around. That all changed after the game.

From a PR perspective, Newton’s postgame news conference (if you can really call it that) demonstrates something we discuss at length when we’re doing media training with clients. Preparation is the key. Certainly, he knew which questions were going to be asked and should have been prepared to answer those questions. Panthers’ staff should have worked with him to avoid the childish display that was demonstrated by the NFL’s newly-crowned MVP.

His moody responses to reporters have a lot of people wondering if this will hurt his reputation going forward. I would venture to guess that many people will have short memories if he continues to play to an MVP level. His antics, however, could have an impact on endorsement deals, particularly when you consider that he remains unapologetic about his behavior. In today’s world, being a sore loser could cost him millions of dollars.

I have watched all 50 Super Bowls, which means there have been 50 QBs who faced reporters after losing the big game. I can guarantee you that they all went into the game thinking they could win and weren’t happy coming out on the short end. I can’t, however, recall any of the previous 49 losing quarterbacks showing such a lack of sportsmanship. Let’s hope that Cam Newton eventually learns a good PR lesson from Super Bowl 50 and the aftermath.
Posted by thePRexperts at 10:04 AM No comments:

For the best results, avoid marketing lingo and technical jargon

Marketing and public relations activities are similar and complementary in many respects, except when it comes to the media.


Reporters will often ignore news releases and media pitches that use marketing lingo or are filled with technical terminology that only industry insiders could comprehend.

Reporters consider marketing buzz words to be “advertising” and will ignore these types of news releases and pitches. Their sentiment is that if you want your company promoted in that way, place an ad. And, they are correct. Their purpose is to share news and information, not promote your business.

As for using technical language, it’s important to know the reporter and his or her audience. If the reporter is with an industry trade publication, it’s great to use industry terminology because they will understand it and likely use that language every day.

However, if you’re trying to catch a reporter’s attention and he or she is not well versed in the industry, then you’ll likely lose their interest. It’s better to write to their knowledge level and gain their interest first. Then during the interview, you can work in technical terminology, but only when appropriate. The key is to remember that media’s audience and think to yourself, will they understand it or should I be speaking in layman’s terms.

Following these simple guidelines will lead to more media opportunities and story placements.
Posted by thePRexperts at 12:14 PM No comments:

Slow time for news could be a good thing

Well, the holidays are over, the Super Bowl is behind us and we’re well into the New Year. This time of year tends to see a bit of a slowdown in news. Why not take advantage of the situation? Now is a great time to contact media to cover an upcoming event, talk about a service or product or any other newsworthy company happenings.

Start by sending out a news release or calendar announcement to local media outlets. Be sure you are contacting the right reporter (research if you don’t know who you should contact) and make a quick round of follow up calls to determine interest. You might also consider contacting television morning news shows that do community segments to see if there is any interest in a live interview. Some newspapers might entertain a column submission as well.

A slower news cycle can be a big benefit to your business. Consider taking advantage of the time of year to promote a newsworthy event or story.
Posted by thePRexperts at 10:09 AM No comments: 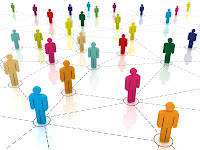 During the past month, I’ve been interviewed by business media, as well as given a presentation at a leadership conference, about online networking.  Everyone wants to know the secret to successful online networking.

When I make the point that online networking is really no different from in-person networking I will inevitably get perplexed looks or comments along the line of:  “But they’re so different. I don’t understand how they’re the same.”  The point is, despite the fact that they take place in very different environments, they really are the same. It’s all about relationship building.

You would never hand your business card to someone at an event and then just walk away. The same is true for networking on social media.  Your LinkedIn request, if all you do is go with the standard, “I’d like to connect with you on LinkedIn,” is no more likely to lead to a discussion or a relationship than handing over your business card and walking away.

Before you ask to connect, do a little research about the person. Do you know someone in common, are they involved in the type of work you want to know about, or did they go to the same college or university you attended?  Asking about someone’s area of expertise is always a good door-opener.  See what groups they belong to on social media and become a part of a group that might further your knowledge or connections. It provides even more reasons to have a conversation.

And like many things in life, networking is not about quantity, it’s about quality. To build a quality network, build high quality relationships. That’s the kind of network that will be valuable to you and to those you’re connected with.
Posted by thePRexperts at 1:20 PM No comments: