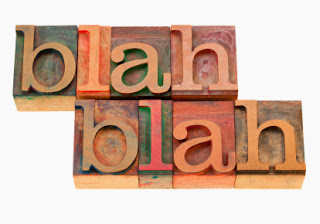 I recently received an email from a sports marketing consultant who was promoting professional athlete appearances in the business world. But after the first two sentences, I couldn’t stop thinking about the ridiculous language the writer was using. The writer was apparently going for the jackpot in using every buzz word in the business world. Here is just one of the lines:  “We would like to discuss the development of strategic professional athlete synergy appearances to help leverage the power of sports and entertainment to reach your targeted audiences."  Other buzz words liberally used throughout the four paragraph pitch for the firm’s services included:  critical integration, optimum engagement, effective strategies, business specific objectives, delving deeper into the game and enhancing revenue. And many of these words were used multiple times.

Really? Who talks like this? I get what you’re trying to say, but why can’t you say it in plain English? OK, I can hear someone saying, “But I want the reader to know I understand what their business is looking for and wants to accomplish.” If you must, sprinkle in a current buzz word du jour or two, but leave it at that. Otherwise, it looks like you’re trying way too hard to prove how smart you are.

I understand that everyone has their own definition of what good writing is all about. To me, it’s being clear and concise; and it should read like you would talk. (Unless you’re writing an academic paper, because writing like you talk in that case would probably result in a failing grade.)
So, what do you think about the buzz word filled approach to messaging? Does it work for you? Are there any buzz words that you like to use and why? Love to hear your thoughts.
Posted by thePRexperts at 9:53 AM No comments:

Careful What You Say…

About a week ago, passengers on a Southwest flight from Tampa to Raleigh-Durham were told something you never want to hear on a plane: “we’re going down.” Within seconds of that message from the plane’s captain, passengers felt the aircraft go into a nosedive as they frantically texted and called loved ones.

But the plane landed safely. It was all a terrible mistake. According to Southwest, the plane was losing pressure so to compensate, the captain took the plane on a rapid decent (or going down) in an attempt to fix the pressure issue. However, the captain’s message was issued over the PA system for all passengers to hear and react to.

It has been argued that the captain mistakenly turned on the PA system for the entire cabin instead of for flight attendants and didn’t realize he was speaking to the passengers when he said “we’re going down.” I say argued, because although this is the account from passengers, Southwest has issued a statement that the captain said no such thing and instead said he was going to “lower altitude.”

I’m not arguing that the captain did or did not use the words “we’re going down.” The fact is, more than one passenger heard something to that effect. But I don’t believe the captain meant to do any harm, either. I can’t possibly imagine the stress he was under during that time. A mistake could have happened.

But no matter what, Southwest has an issue on its hands and so far all that’s been done is to call passengers liars and throw $200 ticket vouchers at it. Sorry, but if that happened to me, I’m not flying Southwest again anytime soon. Perhaps Southwest should have held out on any specific statement until they had a chance to do an investigation into exactly what happened (which is going on now).

To me, this is a great – although a little extreme – example of how words, if not chosen carefully, can do a lot of damage. And I’m not just talking about the captain’s words, but for Southwest making statements before all information has been gathered.

Can you think of another time where just a few words were weighted so heavily? What was it about and what was the outcome?
Posted by thePRexperts at 2:31 PM No comments:

Really, have we gotten that lazy? 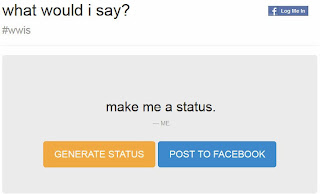 Don’t fret! There’s a new app available that will post things on your behalf. The "What would I say?" app apparently reviews what you posted in the past using a Markov Bot and then generates a status update by predicting what you’re likely to say.

I don’t know about you, but it sounds kind of cold and methodical to me. Personally, I really don’t like anyone predicting what I’m going to say, much less a Bot, whether it’s Markov or some other one.

On the plus side, if anyone ever takes offense to one of your status updates, you can simply say, “I didn’t’ write it, it was my app!” This might get a whole lot of celebrities and sports athletes out of trouble. Hmmm, maybe that is who the app creators are marketing this to."

I’m curious, would you consider using the “What would I say app?”? Why or why not? And please be a person responding and not an app.

Posted by thePRexperts at 1:51 PM No comments: