Why tone matters- and I'm not talking about singing!

There's an old saying, if you don't have anything nice to say, don't say anything at all. Although that's probably much easier in theory than in practice, the sentiment is still a good one. We've all said things that we wish we could take back, or at least word-smith the language we used a bit. Even presidential candidates in this current election cycle have fallen into this trap, attacking their opponent's wives or making fun of certain mannerisms or personal habits, seemingly forgetting that they are running for the most powerful position in the world.

Choosing one's words carefully, with some thought to how we say or even write something, can be easier said than done. But is it? Self-editing by selecting the right word or phrase to convey a message or even a feeling is a deliberate process. Just like great speakers have the ability to process what they say, right before they say it, taking a moment to assess a response before responding can give you a chance to measure and set the right tone in the words you use.

Not sure you can do this? Try this method. If it's an email you're responding to, write it in a voice that's conversational, as if you were speaking face-to-face with the person you replying to. This will help you put the right tone on the conversation, and probably limit any risk of misinterpretation or worse, irritation, by the recipient. Most conversations are civil, so there isn't a logical reason why emails shouldn't also be.

If you're involved in an actual conversation, which sadly is becoming more rare these days thanks to technology, use the pause method to think about the words you are going to say, instead of just blurting out a rapid reply to the person you're talking to. It doesn't have to be a painful or awkward pause (or so long that the other person begins to look for signs you are still breathing), just a few seconds to gather your thoughts, choosing words that indicate you've listened to what the other person said, and aren't being dismissive. Whether you agree or disagree, opinions are opinions, and everybody has them. Don't let an argument ensue, when a good, friendly give and take of ideas can bring out the best in both participants.

Just like a badly played instrument, poorly handled communications can ruin anyone's message. Why not treat every conversation, written or spoken, like it's an opportunity to advance a discussion, or find a solution to a problem? Despite our world of instantaneous and constant communication, it's not a race. Take the time to think before you respond. What's the worst that could happen? People call you a deep thinker?
Posted by thePRexperts at 9:01 AM No comments:

Is Snapchat the next step in social media marketing? 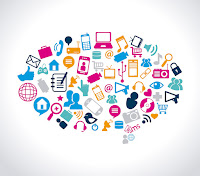 If you’re like me and have children, you’ve probably seen them migrate away from Facebook and Twitter to other social media apps. Let’s face it, teens and young adults have led the way with social media for those of us who are more “chronologically experienced.”

For many in the business world, it took some time, but most have come to understand the social media is here to stay and it’s playing a significant role. So with teens and younger adults now focused on Snapchat, is that where your business needs to be?

For some, the first question is…“What is Snapchat?”

The definition of Snapchat is: “A messaging app allowing users to send pictures and videos that will self-destruct after viewing. Users can also add photos and videos to their My Story section, which can be view for up to 24 hours. Text and graphics can be added to a photo before it is sent, as well as interactive filters and doodles.”

Again, if you’re like me, you probably know all about the discussion of whether Snapchat videos actually self-destruct or disappear after viewing. We’ll leave that discussion for others.

Instead, let’s focus on that business use of Snapchat. As Stephanie McCratic noted in a recent Public Relations Tactics article, “the audience for Snapchat trends young and the platform is an effective tool for reaching today’s much-sought-after consumer: millennials.” Snapchat reports that 60 percent of 13 to 24 year olds in the U.S. are using the app, with 71 percent of the users 34 and younger.

So, should your business jump into Snapchat? Just as you should for any other social media, marketing or PR effort, you’ll need to do your homework. Is this a way to reach your already identified target audience? Does it fit your brand? What are your goals? What resources will it take to reach those goals?

Look for answers to those questions first, then decide if Snapchat works for your company.
Posted by thePRexperts at 1:50 PM No comments:

Spring signals a time for review and assessment

Spring has arrived and we all know what that means. No, it doesn’t mean warmer weather, at least not this year for Wisconsinites. It means if you haven’t already, you should be reviewing your 2016 marketing and PR plan to ensure you’re on track with what you’ve outlined to accomplish this year.

Doing so means assembling your marketing and communications team or, if you’re a one person department, having a sit down with the company president to review your plan. I’m sure the discussion will cover lots of topics but there are five main questions you should focus on. They include:

Of course, these questions will lead to additional questions, but that is the whole point of the exercise. It’s to drill down to truly understand if you’re marketing and PR plan is aligning with the goals of the company.

Ideally, this type of review and planning meeting should take place monthly or even weekly, depending upon your company’s culture and the types of activities you’re promoting, but we all know that’s not always feasible.

That being said, it should be at least quarterly. Any longer than that and you may have missed critical opportunities to make changes to the plan, identify new opportunities or realize you’re right on target and it’s time to celebrate!

I’d like to hear from you on how often your company reviews its marketing and PR plan. Do you think it’s often enough or too often?
Posted by thePRexperts at 1:39 PM No comments: