How tiny things can create a BIG problems 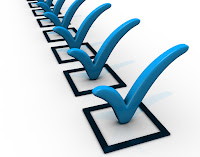 In the PR business, we’re always talking about the need to get things done fast and right. And we talk a lot about proofreading and how it shouldn’t go out the window just because you’re in a hurry. But, when you proofread, it really has to be for more than just spelling and grammar. Oh sure, those are very important things, but there are two other items you should remember when proofreading:
Let’s face it; we’re all in a rush these days. But don’t let the rush to get something out the door turn into a problem that’s going to take up even more of your time.

Are there any other proofreading tips you’d like to share? We’d love to hear from you!
Posted by thePRexperts at 12:26 PM No comments:

Writing is like exercising...getting started is often the hardest part!

Whether you write for a living, or do it for fun, the act of writing can be challenging sometimes, or even occasionally maddening. We've all written something. A letter, a blog, a thesis perhaps? A collective grouping of words on paper or a computer screen. But often, the words don't flow out of your mind so easily, and the impetus to start can literally stop you dead in your creative tracks.  Where to begin?

To build off the exercise analogy, getting started can be the hardest part. Most people stare at the paper or screen for a while, looking for an idea or nugget of creativity to launch them into their project. Cleverness can work, but only if you're clever. Humor is also a good thing, but not everybody's funny. If you don't write often, just like anything else, the process will be tougher. You don't run a marathon without preparation, good shoes and nutrition, and most importantly, putting in the miles. The same thing goes for writing. To borrow a concept from writer Malcolm Gladwell’s book, The Outliers, the more you do something the better you'll be at it. He gave it a name, the 10,000 hour rule, referring to the amount of practice time it takes to be really great at something. Writing follows that same logic.

The more you write, the easier the concepts, structure and the rules of writing will be. So yes, we've all stared at the blank page, but writing involves moving past that, and that often begins with a good idea. What are you trying to say? Is it relevant, newsworthy, interesting? Interest is often generated by a commonly shared belief, or story, that speaks to the reader. If you're writing about an event, was it something you experienced directly, and how did it affect you? Were other people impacted the same way? If the answer is yes, then that story would make for an interesting read. By sharing the experience, with real life feelings and emotions, you've conveyed something that goes beyond the words. So if you're stuck on a writing project, start by writing down something you saw and how it affected you.

Once you've started, you need to build a structure to support the paragraphs you write. Make it simple. Think about a beginning, middle, and end. Introduce the subject with a great beginning paragraph telling the reader why they're here. The middle is the story. Tell it in the best way you can, in the most interesting way. Finally, the end is just that. Wrap it up, but reinforce the value of the words you've written, and sum it all up using one of those concepts I introduced earlier. A funny line, clever play on words, or an emotional tug on the heartstrings of the reader. Make it worth their while.

Nothing about writing well is easy. But the effort is worth it when you've created something that another human being reads, and upon reading the last word, slowly nods their head in agreement. It doesn't have to be Shakespeare or Hemmingway, it just has to be worth reading.
Posted by thePRexperts at 10:58 AM No comments:

When developing your plan of action for growing your business, be sure PR is a key part of the planning process and not just an afterthought tied to marketing.

Far too often, PR is directly associated with marketing and doesn’t get the full consideration it should for the benefits it can provide. Yes, marketing and PR are often complementary, but the two are very different, yet important components, and should be treated as such.

Similar to marketing, PR can be used to help influence your audience. The difference being marketing uses paid advertising in the form of print; television; radio; direct mail or social media, which can be very effective.

PR often uses many of the same media, but in a much different fashion. Our goal is to generate interest by reporters to cover the information as a news story. In doing so, reporters provide third party validation to the topic being covered. It’s similar with social media but the third party validators are a much broader group, not only including reporters, but also customers who use your product.

As for measuring success, it’s often easier to see a direct link between a marketing campaign and sales increases. However, a good PR campaign generates strength to a brand, creates connections between the company and its stakeholders. And yes, good PR helps generate sales.

And, if you ever have “It hit the fan”, you’ll definitely want to make sure your PR team is at the decision making table, and not a group that is provided with the details after all the decisions have been made. The reason is PR professionals are in tune with not only the company but also its audiences and can provide the valuable insight needed to best approach a situation.

Does your company include a PR team member during its planning process? If it doesn’t, why not?
Posted by thePRexperts at 1:36 PM No comments:

Are you ready for another election?

With Donald Trump set to be sworn in as the 45th President in just a few days, the November election is still top-of-mind for electors across the United States. I won’t weigh in one way or the other on the results of the Presidential election, I only want to remind people that another election is just ahead.

Granted, the entire country won’t be focused on one race, but the state and local offices that will be filled with the vote outcome on April 4, 2017 are important.

Throughout Wisconsin various municipal and school board positions will be decided by voters in the non-partisan election. Those elected will make the decisions on the local level that impact city, village and town residents in many ways. It’s the local elected officials who decide how your property tax dollars are spent and what improvements are made in your community.

In addition, Wisconsinites will vote for State Superintendent of Public Instruction, where a primary race will take place in February as Tony Evers seeks re-election.

As a member of Project VOTE of Brown County, WI, I encourage you to take some time to learn about the candidates who will be on the ballot for the February 21 primary and the April 4 election. Project VOTE is a grassroots, non-partisan, volunteer-based organization dedicated to increasing voter turnout in Brown County.

Our local elections, obviously, don’t get the same attention as the national races. But the decisions made on the local level can affect us all in many different ways. I encourage you to learn about the candidates and get to the polls this spring.
Posted by thePRexperts at 12:54 PM No comments:

Reporting live from…everywhere. Can your business incorporate live video to reach your audience?

Social media is constantly updating to incorporate new features and compete with other social media platforms. The latest trend seems to be offering live video to show your followers what you’re doing in real time. Facebook now lets users share live video when they launched Facebook Live in 2016 and Twitter lets users rewatch live videos that were made with their live video app Periscope at any time. Instagram is the latest to join in on the craze, offering a live video stream after their November 2016 update. Instagram alerts followers that you are posting live on Instagram story, similar to a Snapchat story, but the live video can only be seen when the video is live and is immediately deleted.

Celebrities and social media users have been using live videos to show followers what they are doing and to talk about their lives. But how can you incorporate Facebook Live or live video into your businesses social media? Here are a few ideas:

Have you or your business tried live video on social media? We would love to hear what you thought!
Posted by thePRexperts at 8:54 AM No comments: